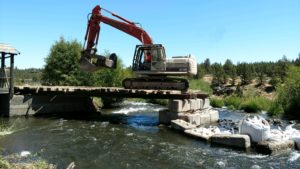 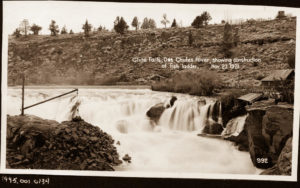 REDMOND — A 107-year-old dam to the west of Redmond, one that provided hydroelectric power to Redmond Airport during World War II and hoped to do the same for a Central Oregon town that existed only on paper, is being demolished.

Beginning this week, workers began to remove Cline Falls Dam, using excavators and sandbags to temporarily alter the flow of the river.

Craig Horrell, district manager of Central Oregon Irrigation District, which owns the site of the dam, said removing the nonoperational, wood and concrete dam on the Deschutes River will hopefully make it easier for trout and other fish species to travel downriver.

The demolition is slated to be finished near the end of this month, and will leave the Mirror Pond dam as the only remaining barrier to safe fish passage between Wickiup Falls and Lake Billy Chinook, Horrell said.

“To remove a dam on the Deschutes is a huge deal,” he said.

Cline Falls Dam was originally built in 1910 by Pilot Butte Development Company, which was sold to the Des­chutes Irrigation & Power Company, the precursor to COID. Horrell said the dam was initially built to provide water and energy to the community of Cline Falls, which received a town plat to the west of Redmond, but never became a town.

“It just didn’t work out the way the forefathers hoped,” Horrell said.

In 1942, the dam was commissioned to provide additional energy for Redmond Airport, which was used by the federal government during World War II, according to Horrell.

During the 1950s, a 5-foot-tall concrete dam was built to augment the wood and rock structure that was already in place.

Cline Falls Dam’s 100-year lease expired in 2010, and the dam has not been operational since. In 2014, the dam became the subject of a lawsuit between PacifiCorp — the parent company of Pacific Power, which leased the site — and COID, which alleged that the utility left the site of the old dam contaminated and in disrepair.

In December 2015, PacifiCorp agreed to pay the irrigation district $1.65 million as part of a settlement, according to The Bulletin’s archives. Horrell added that the​​ settlement was used to fund the dam removal project, which he estimated at $800,000.

He added that the surrounding area, which includes a parcel owned by the Bureau of Land Management, is popular with visitors, and the dilapidated dam could pose a safety hazard.

“My biggest fear is that this was such an attractive nuisance that someone was going to get hurt,” Horrell said.

To design the removal, COID worked with the nonprofit Upper Deschutes Watershed Council and River Design Group, a Corvallis-based company that specializes in river restoration and dam removal. Scott Wright, project manager at River Design Group, said workers began removing accessory structures near the dam itself earlier this summer, after working through a variety of federal, state and local permits.

“The thing about dam removal is that there’s always a lot of history behind them, and they always take a lot of time,” Wright said.

Wright said removing a dam from a major river tends to be a two- or three-phase process. He said workers need to isolate a portion of the dam by diverting the river through a separate portion and removing the rest. Workers use bags of sand from the riverbed — each of which weighs in the neighborhood of 2,700 pounds — to divert the river without harming the fish that live there.

“If for some reason one of them breaks, or something happens, it’s all native material that’s not causing any kind of problems for the environment,” Wright said.

Once demolition is complete, River Design Group will begin working on adding vegetation to the area this fall. Wright added that the area is rich in redband, bull and brown trout, which will be able to move more freely through the river. Following the installation of the fish ladder at North Canal Diversion Dam earlier this year, four of the five dams built along the Deschutes River in Central Oregon during the first half of the 20th century are now safely passable by fish.

“Taking out this structure, this concrete, allows them to move around freely,” Wright said.